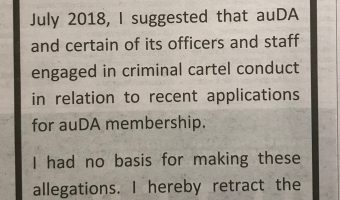 During the recent auDA SGM things got out of control, primarily because of a small group of people. Not only did the resolutions to remove directors fail but auDA and certain officers and directors we accused of criminal conduct, which was obviously unfounded. The Apology and … END_OF_DOCUMENT_TOKEN_TO_BE_REPLACED