During the recent auDA SGM things got out of control, primarily because of a small group of people. Not only did the resolutions to remove directors fail but auDA and certain officers and directors we accused of criminal conduct, which was obviously unfounded.

The Apology and auDA’s Response

Fortunately the record has now been set straight with an apology. As a consequence of these unfortunate events the auDA Chairman released the following statement to members and stakeholders today:

A former director of auDA – Mr Josh Rowe – has today published a full retraction and apology in the Australian Financial Review (page 9) regarding his recent comments.

Good people, with good intentions and driving passion, will inevitably disagree on some important matters when it comes to internet governance. However, Mr Rowe stepped over the line of civil debate that is at the heart of the multi-stakeholder model.

We accept his apology.

Our focus remains building auDA 2.0 with a robust membership model and governance arrangements that improve the reliability and integrity of the .au namespace. These reforms are both necessary and overdue to ensure that trust remains a hallmark of websites ending in “.au” and to protect the interests of the entire Australian Internet community.

An apology was published in the Australian Financial Review today as follows: 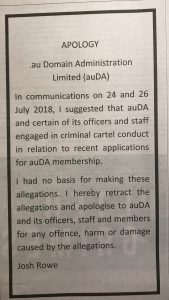 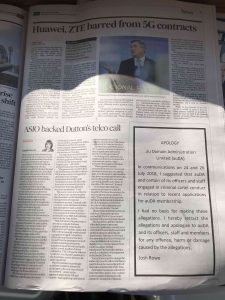 Let’s hope that now the record has been set straight people can move on with their lives and help build auDA 2.0.